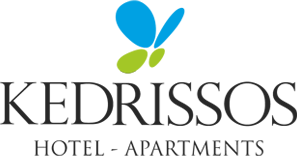 Kedrissos Hotel is built on a picturesque hill, with a spectacular view to the Cretan Sea and the sublime town of Chania.

Nea Chora (which means ‘new town’) was the first modern part of Chania to be built outside the Venetian fortification wall in the early 18th century. In a sense it is the oldest part of the modern town. Nea Chora has a fishing harbour and a good sandy beach which is popular with local people. It is in effect Chania’s town beach and it is a nice one.

The small road that runs along the beach is lined with cafés and (mainly fish) restaurants . There are also a few hotels. The area is not that well known with tourists but it is a great alternative to staying in the old town: you have a beach on your doorstep, parking space for you car, some of the best fish restaurants in town and you are only 10 minutes on foot (walking along the sea front) from the Venetian harbour and the centre of the Old Town.

Just 2.5 kilometers from the city of Chania and 700 meters from the hotel, lies the beach of Chrisi Akti. A very beautiful beach, awarded with the blue flag, with golden sand. The fact that it’s in a bay , it automatically converts and sheltered mainly in the northern winds.

The Gold Coast is considered as one of the most organized beaches of Chania because it offers many services and products. Needs such as umbrellas, showers, lifeguards, water sports, cafes and playground make the Gold Coast a perfect destination for families with children.

Just 4 kilometers from the city of Chania and 900 meters from our hotel, is the touristic place, Agii Apostoli. It’s a tourist developed area that hosts dozens of companies such as small and larger hotels and resorts as well as restaurants and cafes.

The area of Agii Apostoli is well known for its beaches, as in this region, two peninsulas meet thus creating three bays/beaches. These beaches are both sandy with shallow waters and is very organized with umbrellas – sun beds and cafes.

Above the “green” peninsula, stands the church of Agii Apostoli, which has given its name to the other two beaches that stretch east of it.

The park, the hills and the trees make the beach of Agii Apostoli an ideal destination for those who love hiking and nature, and for families with children.

Powered by GSQUARED aka GxG

We use Cookies and Analytics to ensure that we give you the best experience on our website. If you continue to use this site we will assume that you are happy with it.